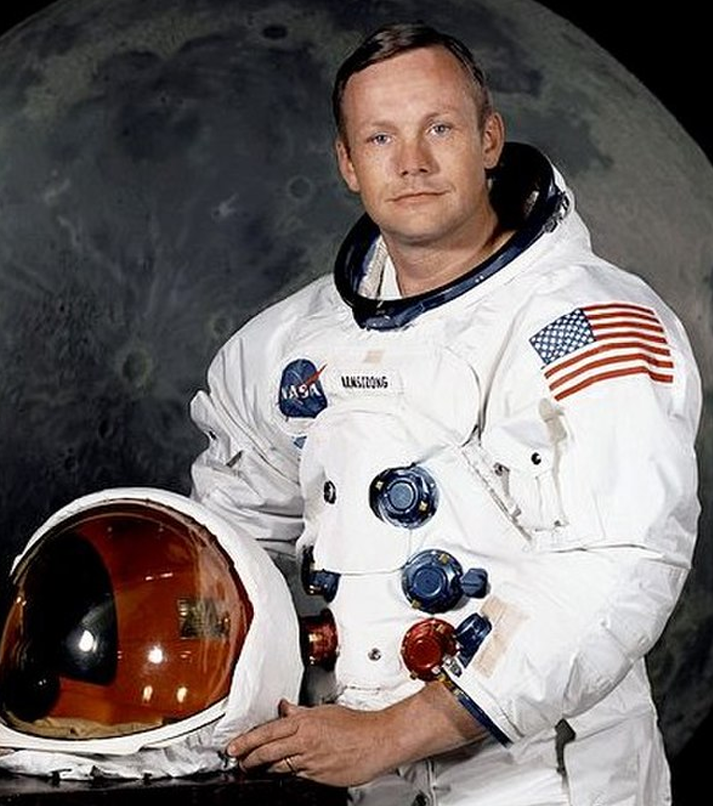 Neil Alden Armstrong is an American aviator and a former astronaut, test pilot, aerospace engineer, university professor, and United States Naval Aviator. He was the first person to set foot on the Moon.

Before becoming an astronaut, Armstrong was in the United States Navy and saw action in the Korean War. After the war, he served as a test pilot at the National Advisory Committee for Aeronautics (NACA) High-Speed Flight Station, now known as the Dryden Flight Research Center, where he flew over 900 flights in a variety of aircraft. As a research pilot, Armstrong served as project pilot on the F-100 Super Sabre A and C aircraft, F-101 Voodoo, and the Lockheed F-104A Starfighter. He also flew the Bell X-1B, Bell X-5, North American X-15, F-105 Thunderchief, F-106 Delta Dart, B-47 Stratojet, KC-135 Stratotanker and Paresev. He graduated from Purdue University and the University of Southern California.

His first spaceflight was aboard Gemini 8 in 1966, for which he was the command pilot, becoming one of the first U.S. civilians to fly in space (Joseph Albert Walker was the first US civilian in space several years earlier). On this mission, he performed the first manned docking of two spacecraft together with pilot David Scott. Armstrong’s second and last spaceflight was as mission commander of the Apollo 11 moon landing mission on July 20, 1969. On this mission, Armstrong and Buzz Aldrin descended to the lunar surface and spent 2½ hours exploring while Michael Collins remained in orbit in the Command Module. Armstrong is a recipient of the Congressional Space Medal of Honor.

Neil Armstrong was born in Wapakoneta, Ohio, the son of Stephen Koenig Armstrong and Viola Louise Engel.  He had two younger siblings, June and Dean. He is of Scots-Irish and German descent. Stephen Armstrong worked for the Ohio government, and the family moved around the state repeatedly in the 15 years following Armstrong’s birth, living in 20 different towns. His father’s last forced move was to Wapakoneta in 1944. By this time, Armstrong was active in the Boy Scouts and he eventually earned the rank of Eagle Scout. As an adult, he would be recognized by the Boy Scouts of America with their Distinguished Eagle Scout Award and Silver Buffalo Award.  In Wapakoneta, he attended Blume High School.

On July 18, 1969, while flying towards the Moon inside the Columbia, he greeted the Scouts: “I’d like to say hello to all my fellow scouts and scouters at Farragut State Park in Idaho having a National Jamboree there this week; and Apollo 11 would like to send them best wishes.”; Houston: “Thank you, Apollo 11. I’m sure that, if they didn’t hear that, they’ll get the word through the news. Certainly appreciate that.”

In 1947, Armstrong began studying aerospace engineering at Purdue University, where he was a member of Phi Delta Theta and Kappa Kappa Psi.  He was only the second person in his family to attend college. He was also accepted to the Massachusetts Institute of Technology (MIT), but the only engineer he knew (who had attended MIT) dissuaded him from attending, telling Armstrong that it was not necessary to go all the way to Cambridge, Massachusetts for a good education.  His college tuition was paid for under the Holloway Plan: successful applicants committed to four years of study, followed by three years of service in the United States Navy, then completion of the final two years of the degree. At Purdue, he received average marks in his subjects, with a GPA that rose and fell over the eight semesters. He received a Bachelor of Science degree in aeronautical engineering from Purdue University in 1955, and a Master of Science degree in aerospace engineering from the University of Southern California in 1970.   He holds honorary doctorates from a number of universities.

There was no defining moment in Armstrong’s decision to become an astronaut. In 1957, he was selected for the U.S. Air Force’s Man In Space Soonest program. In November 1960 Armstrong was chosen as part of the pilot consultant group for the X-20 Dyna-Soar, a military space plane. On March 15, 1962 he was named as one of six pilot-engineers who would fly the space plane when it got off the design board.

In the months after the announcement that applications were being sought for the second group of NASA astronauts, he became more and more excited about the prospect of the Apollo program and the prospect of investigating a new aeronautical environment. Armstrong’s astronaut application had arrived about a week past the June 1, 1962 deadline. Dick Day, with whom Armstrong had worked closely at Edwards, worked at the Manned Spacecraft Center, saw the late arrival of the application, and slipped it into the pile before anyone noticed.   At Brooks City-Base at the end of June he underwent a medical exam that many of the applicants described as painful and at times seemingly pointless.

Deke Slayton called Armstrong on September 13, 1962 and asked if he was interested in joining the NASA Astronaut Corps as part of what the press dubbed “the New Nine”. Without hesitation, Armstrong said yes. The selections were kept secret until three days later, although newspaper reports had been circulating since the middle of summer that year that he would be selected as the “first civilian astronaut”.   Armstrong was one of two civilian pilots selected for the second group, the other being Elliott See who, like Armstrong, was a formal naval aviator.

Armstrong did not become the first civilian to fly in space, as the Russians launched Valentina Tereshkova, a textile worker and amateur parachutist, aboard Vostok 6 on June 16, 1963.